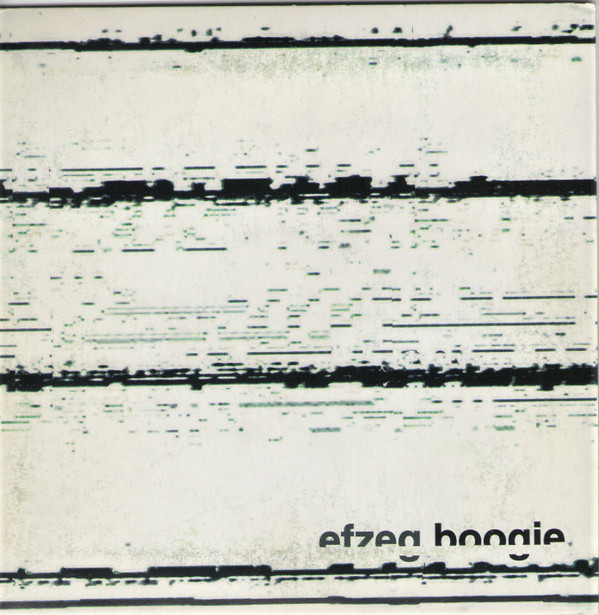 Two years after Efzeg's debut Grain, Boogie portrays a group more closely knit then before, a unit that has reached a level of understanding that sends fans of (acoustic, electric or both) improvisation into a state of bliss.

Yet, between 2000 and 2002 the panorama of experimental Improv has changed considerably.

Grain came out when the words 'Berlin reductionism' and 'onkyo' had yet to be fathomed. It proposed a ground-breaking approach to the genre, silence-based, electro-acoustic in nature. Many artists developed such an approach in a short amount of time. By Boogie it had become the favorite research field (this reviewer can't coerce himself in using the word 'trend') in avant-garde circles.

The album is dedicated to John Lee Hooker, but don't start looking for scraps of blues. The only connection between the two artists is their use of guitars (then again...) and the fact that Efzeg also aims at something atavistically organic. The improvisations grow slowly, endowed with a life of their own, bigger than the breaths the four musicians blow into it. Boris Hauf plays less saxophone than before (or it is so treated electronically that it becomes immaterial). Dieb 13's turntable work focuses on sound events (no quotes), providing rich textures. Burkhard Stangl and Martin Siewertšs guitars go through an array of electronics, but they can occasionally be heard as such < an electric passage at the end of 'Tor', some acoustic strumming a few minutes before. Those and the final sax breaths in łKapulanta˛ are the only moments where individualities surface.

Efzeg also comprises a video artist, Billy Roisz. Her work is featured on the enhanced portion of the CD. The 10-minute track 'Pram' is accompanied by a video made of feedback camera signals. A demanding listen but a rewarding one.