CHARLIE HADEN The Ballad Of The Fallen 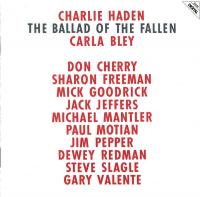 Bassist Charlie Haden reactivated the concept behind his late '60s Liberation Music Orchestra for this 1983 studio project, built around songs from the Spanish Civil War and other 20th century civil conflicts in the Spanish and Portuguese diaspora, including Chile and El Salvador.

As arranged by Carla Bley (who, like Haden, also contributes originals), these 12-piece orchestrations showcase virtuoso players (including Dewey Redman, Michael Mantler, Paul Motian, and Jim Pepper)in luminous, restrained settings that capture both the dignity of the sources and the sorrow, anger, and pride elicited by their history. Even without its political subtext, The Ballad of the Fallen is a rich, elegiac marvel of large ensemble jazz.