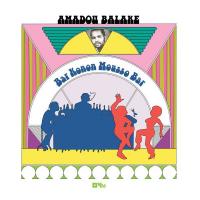 A beautiful reissue of this wonderful album by Amadou Balake. Original artwork and remastered tracks. Tip!Hailing from remote Burkina Faso, Amadou Ballakï¿½ stands as one of Africaï¿½s most mesmerizing voices. He has achieved an amazing musical heritage with many albums and singles released along his long career, which started in the early 1960ï¿½s. In 1978, four years after the first recorded single version of Bar Konon Mousso, Ballakï¿½ covered that song once again, in a harder funk mode. Named Super Bar Konon Mousso, it was an updated version of the song which made him famous in his home country. This song is a masterful ode to the penniless musicians and the night ladies from African nights. Itï¿½s faster than the more atmospheric original version and it fitted perfectly to the more urbane moods of that era. Tondibama is a traditional warba song with cheerful horns arrangements and some light backing vocals. A percussionist in his own right, Ballakï¿½ let loose and displayed some effortless vocal acrobatics. Nabacouboury is another warba number that Ballakï¿½ sung many times over in his long career. Dounignamou circles on and on as if one was to assist a village dance. The trumpet plays the role of lead vocal at the end of the song while the rhythm section cooks up a sturdy instrumental background. With some hint of machismo, Aminata, du thï¿½! is one of the most powerful funk numbers to come from 1970ï¿½s Africa. A true dynamite song, it leaves no doubt as to where his influences come from. Deep and hypnotic, from his moans and groans introducing the song, Ballakï¿½ stood here at his most James Brown-like, an inspiration with whom he was to have a NYC airport encounter in the 1980s. Itï¿½s all about sweat, power and sincerity. Ballakï¿½ ya Mariama displays Ballakï¿½s most romantic sides. With obvious afro-latin influences Ballakï¿½ sings about the grace of women and the way they move their hips while walking. A true salsero in his own right, Ballakï¿½ learnt his afro-cubanisms all across West Africa. It comes as no surprise that he later emerged as a world-class salsero, as one of the main voices within Africando. Moving and working between Abidjan, Paris and New York between the late 1970s and early 1980s, Ballakï¿½ produced this classic album before moving back to Ouagadougou in the late 1980s, where he still performs on a weekly basis to this day.