CAPPRA & DEVOE You Are Everything To Me 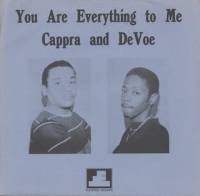 James "Jima" Cappra is a Leo, who hails from Bean Town, and although he sang along with his idols, the Jacksons, Smokey Robinson and Stevie Wonder, he didn?t decide to go public until 1982. Troy DeVoe, a Sagittarian is also from Boston, Mass., and by visiting and observing, taught himself the keyboard in the mid seventies. His original melodies needed lyrics and that's when he and his life time friend Jima got together. At first it was difficult to convince James that he was a vocalist, but by adding a rhythm section and calling themselves the ?Cruise Band?, they were off and playing. The band lasted long enough for Cappra and DeVoe to know that they could work together, and it gave them more confidence. They worked with such artists as Planet Patrol, New Edition, Margo Thunder, Jay Dixon, Maurice Starr, and Larry Wu. James Cappra is Bobby Brown's brother. Troy DeVoe is Ronnie DeVoe's uncle from Bell Biv DeVoe aka BBD Capri and DeVoe?s first album of originals was ?Get Street Wise?. Now still writing and arranging, they?ve added producing to their credits. Their new release is entitled ?You Are Everything to Me?.