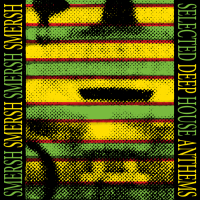 Dark Entries returns to the New Jersey basement studio of Smersh to unearth a 4-track selection from the ‘Deep House Anthems’ cassette. Smersh was the duo of Mike Mangino and Chris Shepard, who began making music together in 1978. They were uninterested in traditional notions of songwriting or live performance. Recording in a domestic setting necessitated the abandonment of live drums for rhythm machines, and the Smersh sound would gradually change with each new bit of gear they acquired. The Electro-Harmonic Rhythm 12 gave way to TR606, TB303, and SH-09. Most Monday nights, they would write a new song from scratch. A couple hours later, the song was recorded, never to be performed again.
By 1988, they had already put out at least 16 different tapes on their own Atlas King imprint. They would be followed by as many more. “Some of those [subsequent] tapes there were less than 10 copies that got made because nobody wanted them. They couldn’t get reviewed,” says Mike Mangino. As these tapes traded their way across continents, Smersh developed a devoted following in places far beyond Piscataway, leading to releases on dozens of other labels from around the globe. Smersh’s sound is a lush hybrid of techno, industrial, dance, and experimental. Most songs revolve around driving EBM style beats, intricate industrial noise manipulation and synth melodies. For ‘Selected Deep House Anthems’ we selected 4 tracks of pulsating acid techno, which were recorded live, direct to DAT. All songs were originally recorded and released in 1991, and this the first time all but one of these songs are appearing on vinyl.
Each song has been carefully remastered from the cassette originals for vinyl by George Horn at Fantasy Studios in Berkeley. The vinyl comes housed in a replica of the ‘Deep House Anthems’ sleeve which designer Eloise Leigh modified using art motifs and textures sourced from the original cassette, plus an oversized postcard with notes.