NAUM GABO It's On EP 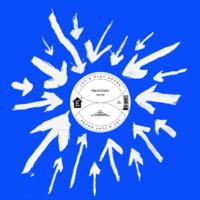 Expanding a transatlantic connection forged with releases from UK artists The M.E.B. and Dead Rose Music Company, the fourth release for Let's Play House comes from Glasgowegian techno heroes Naum Gabo (Jonnie Wilkes of Optimo and James Savage) who inject a bit of motoric stomp to LPH's generally housey identity. The 12" starts off with "Ah & Oh," a creepy, frantic boogie that quickly hypnotizes with its loopy synth progressions and chopped-up vocal samples. The song eventually disintegrates into a thinned-out smattering of glitches and blips, making for a seamless transition into the more bass-heavy second track. "It's On" boldly conveys a sense of lunacy and impending (dance floor) doom, as though the club might collapse unless you keep stomping along to the distorted bass warbles. The flip also features a remix of "It's On" by Chicago's drum machine man, the legendary Tevo Howard, who trims the fat, making for a more streamlined yet muscular rendering of the original. An acid version of the mix will be offered as a digital exclusive.