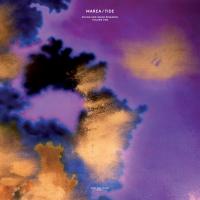 Piergiuseppe Ciranna & Alessandro Pizzin first conceived the "Sound and Image Research" series back in the early '80s, when they were involved in various multimedia projects in art galleries and unique exhibition spaces across Italy. In 1984 Ciranna and Pizzin came across the works of Italian artist Luigi Viola, a painter whose work was already known internationally and who was active in galleries worldwide. When the opportunity arose for the three to come together it quite naturally led to the creation and production of the album Marea/Tide; a record not only inspired by the work of Viola but evolved in symbiosis. It was to be the first and sadly the only volume in Ruins’ “Sound Image Series”.

‘Marea/Tide’ was released in early autumn 1984 and showcased on November 24th of the same year at an exciting one-off event, alongside exhibitions of the works and listening sessions at the well-known Villa Sagredo in Venice. Further showcases were performed at galleries across Italy by the duo alongside Viola’s art. The records, for the large part, being available solely at those events.

The first (and only) print of the album was limited to 600 copies, 200 of which also included an original screen-print of two different works by Luigi Viola; ‘Cuore veneziano/Venetian Heart’, numbered and signed by the artist. Due to poor management and disagreements with the label which produced the record, 300 copies were held for many years in storage and then later sadly destroyed, and ‘Marea/Tide’ disappeared almost completely without trace.

Finally available again, and now including a bonus 7” with four stunning unreleased tracks, Ruins’ cult Art record has now been reprinted in colours true to the original work of Luigi Viola, as well as including printed insert with updated liner notes.
レーベル #: MUSIC FROM MEMORY (HOL)