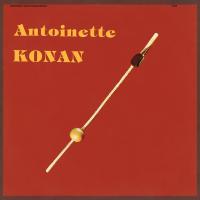 It makes sense that Antoinette Konan's eponymous album features nothing more than her ahoko on the cover. The deceptively simple traditional percussion instrument transformed Ivory Coast's Baoulé music scene when Konan deployed it against a roaring electrified backdrop of synth, bass guitar and drum machines. Released in 1986, the album is a veritable UFO of instrumental force and contemporary pop sensibility landing in a boiling pot of diverse, creative characters inhabiting Abidjan, Ivory Coast (Côte d’Ivoire). Known as the "Queen of the Ahoko" among Ivorians, Konan single-handedly put the central-Ivorian instrument on the map when she gave it a 20th-century re-introduction. The three-piece wooden idiophone is handmade from a thin, ribbed, flexible stick, against which a smaller chunk of wood is rhythmically scraped. A hollow nutshell held in the non-scraping hand amplifies and manipulates the resulting overtones. Despite the ahoko's diminutive appearance, Konan and her powerful voice have remained at the forefront of Ivorian music for decades now, in an extremely diverse country—approximately 70 indigenous languages—with a competitive, internationally-recognized music industry.Music plays an important role in Baoulé cultural life, heard and seen in festivities, funerals and more. They are the largest ethnic group in Côte d’Ivoire and descend from Akan peoples who migrated from present-day central Ghana. Baoulé vocal music is characterized by polyphony, melodies built on parallel thirds and call-and-response. All of this can be heard in Konan’s music.Konan's fingerprints are all over Antoinette Konan, she says, as it was meant to be a highly personal recording. She wanted to portray the suffering, injustice, frustrations, humiliations, personal career struggles, experience of child birth and poverty she sees in society. Taking on the producer role for the first time, Konan was the architect of her dancefloor-ready neo-traditional sound. But crucial to the recording was arranger Bamba Moussa Yang. A creative and versatile musical mind who was known for his work with legendary Ivorian singer Ernesto Djedje, Konan met him in 1986 after she had already released two albums. Yang brought a touch that matched Konan’s expectations, she says, because he knew her work so well. As she reflects on her long career today, Konan remembers Yang as her favorite arranger.Over the years Konan’s popularity grew to the upper echelons of Ivorian society: Ivory Coast's first president Felix Houphouet Boigny's would regularly invite Konan to perform at official ceremonies with foreign dignitaries. Through her charity and advocacy work on behalf of female musicians, Konan is still a force in the country’s music community. You can see her performing or speaking on television and around the country all the time—yet she still maintains several entrepreneurial projects in the farming sector. Konan has recorded more than 15 albums so far and plans more recordings soon.

レーベル : AWESOME TAPES FROM AFRICA (US)