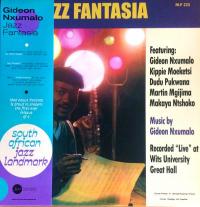 Along with Chris McGregor, Gideon Nxumalo helped pioneer the pre-exile South African Jazz sound. His 1962 album ‘Jazz Fantasia’ is widely regarded as a seminal South African jazz record. The record featured legendary jazz altoists Kippie Moeketsi and a very young Dudu Pukwana Dudu Pukwana plays sax in similar Albert Ayler's vein! Moeketsi was a colossal South African jazz figure during this time, and ‘Jazz Fantasia’ signaled Moeketsi’s last commercial success before his struggles with alcohol and depression took their toll. The album was recorded at the Great Hall at Wits University in September 1962. The university as part of an arts festival commissioned it. With a limited pressing at the time, the album has become a revered foundation of modern South African jazz music, even though it is a rare album to find.
True to its name in both form and spirit, Gideon Nxumalo’s 1962 Jazz Fantasia is a key document of modernist South African jazz. Vital, ambitious, consummate in conception and execution, it is perhaps the crucial small group recording of the early 1960s, and one of the few complete sets by a small modernist group to have been released on LP during these years.

Nxumalo himself is an absolutely central figure in the development of modernist jazz sounds in South Africa. A university trained pianist, he taught piano and theory at Dorkay House, and he composed the music for the Sponono musical, the first South African production to play on Broadway. As evidenced here, his playing is of singular stamp and his compositions are radical and exploratory, but as with so many South African innovators, his recorded footprint is frustratingly small and incredibly hard to find. The few LPs issued under his name are so rare that in musical terms he has become a virtually unknown quantity. But his stature is in no doubt.