MAT PLAYFORD Each Other EP 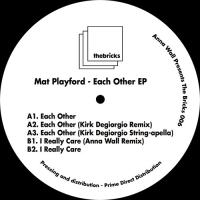 Mat Playford has an affinity with keys; he feels just as at home playing the Rhodes piano as he does the Prophet-6. Alongside mastering various synthesizers, he’s become known for his live jams, and bringing a trademark musicality into all his work.

For ‘Each Other’ Playford used an old Roland XV-88 keyboard and the Moog Sub 37 with reversed strings; the outcome is a record that pays homage to late 80s early 90s techno. “There was a direct feeling that I had when making this record. It was my mum and dads 50th wedding anniversary. I was really proud so I thought I’d make a record to remember that day…it was a lot of fun channelling that into music” says Playford. The Kirk Degiorgio remix is a modern day classic encompassing replayed emotive strings and ever-evolving 303 acid line.

The sentiment behind ‘I Really Care’ is about the process of authenticity. It was recorded in one take at Devon Analogue studios not long after he finished recording his latest album. “It’s about the process of making music, doing it live and performing it” he says. The Bricks label founder Anna Wall has delivered a TR-909-led remix with elements also recorded live. It’s the first time she’s released music of her own on her label that’s now into its 6th release.