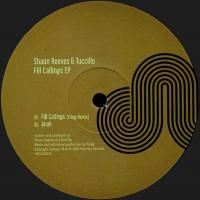 Both artists have been releasing music for over a decade with Tuccillo making appearances on Inermu, Holic Trax, Djebali and 8bit, whilst Reeves initially burst onto the scene via Raum…music and Wolf + Lamb before co-founding Visionquest where he still continues to release the bulk of his work. That label is also where the pair initially joined forces and, aside from an outing on One Records and Shantu, where the two have consistently collaborated. Following the release of Archie Hamilton’s debut album, Reeves and Tuccillo now join Moscow Recordings alongside artists like Argy, Noha, Mennie and Floog.

Meandering onwards, ‘Fill Callings’ is a deep and dubby cut with pulsating bass, skipping hats and metallic whirrs. Next, ‘Chaboi’ ups the tempo, implementing a compelling groove whilst deep chords are joined by various tiny elements that pan throughout the mix, leading into ‘Anak’ – a stripped back number with a mean bassline, crystalline stabs and murmuring vocals. On remix duties, Romanian producer Floog adds extra thud to ‘Fill Callings’ courtesy of pronounced kicks and a reverbing snare that drives the track forward whilst a combination of distorted effects squelch and rattle.
レーベル #: MOSCOW (UK)