NEXUS 21 Made In Detroit 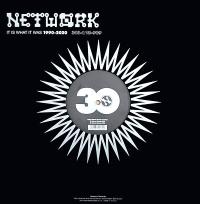 Of all the Network treasured relics set to be released this year to celebrate the 30th Anniversary of the label there’s nothing as appropriate as the Nexus 21 “Made In Detroit” EP - it was recorded in the 1990 starter year and has been stuck In the vaults gathering dust ever since.

Why the 4 tracks on the EP never got issued is partially shrouded in mystery as explained later on,

I first met Mark Archer at one of the infamous Thursday night House Music sessions at No 7’s Wine Bar in Burntwood. It was my local haunt,and I used to turn up with acetates and test pressings of just recorded Techno tracks from my regular trips to Detroit for DJ Neil Macey to give them their first UK plays.

Neil, who later came to work at Network, introduced me to Mark and we got talking about his partner, Chris Peat, and their recording project Nexus 21. They had released a pioneering U.K. Techno meets B-Boy album “The Rhythm Of Life” on Stafford label Blue Chip which had gone out of business. I was intrigued by the idea of working with fellow Midlanders making music I was used to going to Detroit to find for the Kool Kat label I co-owned.

For their part, Mark and Chris were beguiled by my Detroit connections. especiallythe fact I was managing their Techno idols Derrick May, Kevin Saunderso and Juan Atkins. A brief courtship was consummated when they signed to was to become our new label, Network, and our music publishing outfit Kool Kat Music.

Network bought the rights to the Blue Chip recordings, and tapes of the standout track “(Still) Life Keeps Moving were instantly despatched to Detroit where Kevin Saunderson conjured up a magical remix - at mates rates compared to what I was charging the majors record label majors for a rework by him -
and he also threw in the first remix ever done by an unknown kid called Carl Craig!

This Stafford-Detroit connection seemed such a winner that my Netwotk partner Dave Barker and myself agreed we should send our new signings to Detroit to record. Not surprisingly there were no objections from Mark or Chris! Our bank manager would have probably had a view, but we never asked him anything.

We flew over in April 1990 and tracks were recorded at Kevin’s KMS Sudiio. Derrick May’s Transmat set up was upstairs in the same building, and Juan Atkins Metroplex operation next door. Mark and Chris were in Techno heaven. Four tracks were recorded “Don’t Do It Like That”, “Nexus”, “No Statues” and “Together” with a young Marc Kichen supplying percussion. Jay Denham added bits too, and Kevin supplied his engineer Chris Andrews working the desk where Inner City’s mega hit “Good Life” has been recorded a few months earlier.
For good measure you can hear Kevin talking on the outro to the instrumental mix of “Don’t Do It Like That.”

All in all an epic trip. I can remember flying back to the UK with the guys absolutely delighted with the recordings and planning World domination. So why didn’t the recordings - apart from “Together”- never get released? I would love to give you a detailed explanation but I can’t!
I vaguely remember a plan to add “Nexus” and “No Statues” to the Nexus 21 tracks later released on the excellent “Progressive Logic” Network EP, the idea being that this would be the basis of an LP which we believed would establish Nexus 21 as electronica giants.

As for “Don’t Do It Like That” with those beguiling sassy vocals by Donna Black, we had hopes of a Pop crossover hit once the (never released) album came out. In the middle of all this not very well defined but optimistic plotting, our World turned upside down when Mark and Chris turned up at the Network office one day with what ended up as the first Altern 8 tracks, We all went on a Rave mission, and the Detroit tracks were put aside for another day.