THE EMPEROR MACHINE Music Not Safari 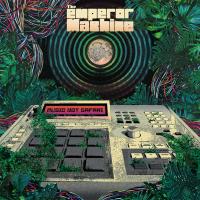 Andy Meecham is a long-time stalwart who remains unconventional and inventive in all he does. He hasvbeen dazzling dancefloors for years as ​The Emperor Machine ​with his synth-heavy, tough edged andvpsyched-out disco beats on ​DFA, Phantasy and ​Skint Records​, and has a musical history dating back to thevUK’s acid house explosion as part of ​Bizarre Inc. and latterly ​Chicken Lips. His grooves are tough and designed for dancing but are always full of space-age cinematic details that make them stand out from the crowd. That is also true when serving up one of his unique live shows; few conjure the sort of soundscapes as ​The Emperor Machine​, and for that reason, he has been a hit at ​Craig Richards’ Houghton festival and is the only live artist to have been invited back twice to the bi-annual ‘Revolting‘ party ​Berghain’s ​infamous Lab.oratory. In the studio, he has collaborated to critical acclaim with the likes of ​Erol Alkan as ​Future Four​, and picked up high profile support along the way from DJ’s including ​Andrew Weatherall, The Black Madonna, Francois K and ​Laurent Garnier, to name just a few. Across his latest full length, he once again runs a gamut of styles with a true sense of studio flair few can match, making ​‘Music Not Safari’ ​a truly unique listening experience.

Opener '​C.C.​' is a colourful synth opus, with skyward chords and disco beats all getting you up on your toes. The shimmering synths continue on '​What You Need​', which has hip swinging claps and perfectly squelchy boogie bass that goes back to the future. Recent single, '​House Des Lowe​' is full of trickery, reverb, and peerless sound designs, with its rubbery bass and elastic grooves all lit up by darting chords and dancing percussive patterns.

The Emperor Machine's tracks are never less than luxurious and ebullient and that's the case again on 'Moscow Not Safari,' a cosmic adventure filled with lithe synth work and sonic definition of the highest order. After more rumbling drums and rugged bass that are designed to ignite disco lovers from all eras on 'Stiff Poly' comes the latest single. '​Danse Blanc​' is an electrifying track that speeds up as it unfolds, with a knotted baseline and organic, wooden percussion all tumbling freely beneath celestial synths and keys. Like all recent singles, when this one gets its standalone release it will be in three forms;​‘Extended’, ‘Version 54’ and ‘Warehouse mix’. ​Former singles '​Function​' and '​Two Voice​' then keep the good times alive with the prickly and upbeat disco charm of '​You Two​' sandwiched in between.

This is another timeless offering from one of dance music's most consistently excellent names and comes ahead of live performances at ​Golden Pudel Club in ​Hamburg​, ​Good Room in ​N.Y. and two slots at the UK’s best-loved Somerset festival​ ;)