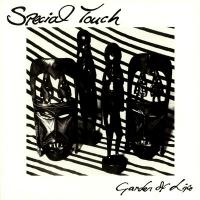 When you talk about UK Street Soul, and the sounds that define it, it’s impossible to look past Special Touch’s first and only album, Garden of Life. A shining example of this often retrospectively termed genre, which loosely categorised black, soul-inspired music with a DIY, bass-driven aesthetic from the late ‘80s to early-mid ‘90s, this impossibly rare record from cult label Top Secret Recordings weaves a unique brand of positivity and musicality across nine uplifting tracks. With original copies never having traded hands for below £100 on Discogs, this fully licensed, remastered reissue for Heels & Souls Recordings debut release will be a welcome sight for many.

A family affair through and through, producer and TSR founder Robert Charles Roper and his vocalist brother Duval created an LP that effortlessly married the rawness of underground hip-hop, R&B, reggae and early house with the sentiment and warmth of soul music.

The continuous thread over the nine tracks is a sense of optimism, whether on the house-flecked ‘It’s Your Life’, the slung-back ‘Tonight’ or the breakbeat-punctuated ‘Music’. And few, if any, street soul tracks hit the same sublime heights as the title track ‘Garden of Life’, a consummate encapsulation of the Special Touch sound, decorated with breathtaking synth melodies layered over crunchy drum machine hits and Duval’s soaring vocals.

A high-point of an underground street soul scene that caused vibrations throughout UK dancefloors, blues parties, soundsystems and pirate stations from Manchester, London, Leeds, Bradford, Birmingham and beyond, Heels & Souls Recordings are delighted to be working alongside Robert to present a relicensed version of Garden of Life for their debut release, remastering the record from the original DAT tape at The Bakehouse Studio.

Complete with a printed inner sleeve detailing the history of Special Touch and the record’s significance, label co-founders Ben Croft and Patrick Forrester, alongside Prime Direct Distribution, will also be donating their respective share of profits to The Black Curriculum, a social enterprise delivering Black British history programmes and teacher training to facilitate both national curriculum and wider societal changes.

JOHN GOMEZ - Reissuing one of my favourites!

RUF DUG - They've done the impossible, reissuing a Street Soul holy grail. Super rare album, funny money, not any more. Everyone's doing a reissue but I don't know many people who are doing it in quite as considered a manner as the Heels & Souls crew.

MAX ESSA
Great to see this is coming out! I've been playing 'Garden of Life' in my sets for several years and it's great to see the rest of the tracks getting a fresh release here. Love it!

MELON
Such a great vibe & so many good tracks, absolutely love the whole album. Big fan & collector of the UK Street Soul but missing this one some how. A masterpiece like Soul II Soul but than underground.

MARCO WEIBEL/ DARKER THAN WAX
Wow! Literally love this street soul label so much! Loving Garden of Life and Music!! Thankful for this reissue!!

JIMPSTER
What a treat!! I’m such a sucker for raw soul when it’s completely stripped back like this. Almost demo-like in how underproduced it is and all the better for it! I find it inspiring to really listen to music like this which seems so of its time yet still sounds so fresh.

WILLIE GRAFF
What a surprise this one! I've had the original on my Discogs wantlist for years...A true Street Soul holy grail on the great TSR label. Thanks to Heels & Souls for making it available again. Every cut hits hard on this album, excellent positive vocals from Duval. Ive been playing an edit of Garden Of Life for the past years and never gets old. I'll be playing this for sure.

BALEARIC ULTRA’S
Now this is stirring up happy memories of driving into town in my ace blue Nova listening to Buzz FM. Big up Heels & Souls for the reissue. An album of total joy.

NIAL DIABLO/ EL DIABLOS SOCIAL CLUB
Killer album this! It's taking me back to when i was young and my sister used to play all the soul control tapes. Street soul seems to be the well deserved sound of summer 2020.

PHIL COOPER/ NUNORTHERN SOUL
Wonderful stuff, full support from me and bravo on this being done for a great
cause...

STE HODGE/ KAT RECORDS
Top release right here….and one I’ve been after for a while so great so see it being released again and to such a good cause. All killers on this.

HIFI SEAN
DIY soul with cheap drum machines what is not to like ....it sounds like Sly Stone on a budget which is still amazing x

BILLY SCURRY/ DUBLIN DISCO
Wow! This takes me back to living in Tottenham in '88, All Ten City 'Foundation' and Loose Ends 'Chuckeboo"

FRED EVERYTHING/ LAZY DAYS RECORDS
I wasn’t aware of this! It’s your life is my pick here.

SIMON HARRISON/ BASIC SOUL
2020 is proving a cracking year for me discovering old music that I've not heard before but this does sound familar.. No shazam or discogs back when this came out. Some lovely tracks on this lp.