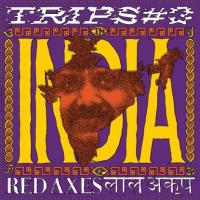 Red Axes return with the third EP in their ongoing Trips series. This multimedia project mixes up music, film and travel and finds the cult pair seeking out extraordinary collaborations in the countries they visit. This time they head to India having previously visited Vietnam in 2019, and Ethiopia and The Ivory Coast in 2018.

Niv Arzi and Dori Sadovnik run their own Garzen Records label and have become much loved for their psyched-out and unusual fusions of guitars, synths and drums. From acid to techno to experimentalism they have done it all, and also worked with Life And Death label boss DJ Tennis as Redrago on a well received album in 2019. This project is about engaging with local cultures and musical traditions, linking up with local musicians, playing and recording with them and presenting workshops for youth music schools.

First up is ‘Pad Yoga Raga’ which has a mesmerising flute floating above a spoken world monologue about the history of raga. Supple bass synths and gently drums roll below to hypnotic effect and the whole thing is hugely atmospheric. ‘Mumbai Syndrome’ is as busy as the famous city itself: it bristles with life, bird sounds, hiccuping percussion, tabla sounds and slick grooves that sound like on India’s famous trains. ‘Dehli Little Prince’ is a little deeper and more trippy thanks to the fusion of western rhythms with Indian melodies and instrumentals, which come on in uneven loops and eventually melt your mind. The Bangalore Rave Version is characterised by exquisite sitar and more rippling tablas.