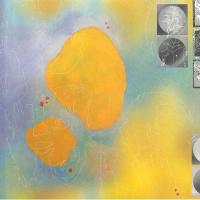 Under the moniker Melquiades, Australia's Alex Albrecht has released music for Scissor & Thread and his own Analogue Attic Recordings imprint - to great acclaim.
His sound emanates in improvisations from the deeper fringes of dance and electronic. Able to find a jazzy quality in the sounds of the natural world, his subtle blend of ambient, electronica, and deep house has a nineties ethereal element.

His first release on Bouquet: 'Further Afield' took field recordings from his recent time of the road. Introspective reveries blend with percussive feelings of movement. Mesmerising meditations inflected with his signature tendency to improvise, the record is the result of his deep connection with his surroundings as he traveled with receptivity to the influence of the environment on his mind.

A1. 'Denver Chimes' is built on a walk through the suburbs and the sound of chimes hanging next to a tire swing. But the macro view of that scene is the backdrop of the Rockies, and the end-of-tour feelings knowing you are about to board a plane home.

A2. Born in a thunderstorm followed by dense humidity neat Storm King in New York, 'Upstate Dream' is inspired by the experience watching it roll through the gorge and over the sculptures, moments before a torrential rain. But the track closes with the sonic images of sitting by the river as the sun re-emerges after the downpour.

B2. 'Sprinkler' closes the EP inspired by recollections of summer festivals in Victoria mixed with flashes of memory of Australian Bush scenes. Like the other offerings of the record, it is the memories of Melquiades' home through the diffused haze of surealness, mixed with the excited energy that comes from life on the road.

Bouquet. was inspired by both the artistry of the tracks and the narrative feel of the concept.
Melquiades was making recordings as well as journaling his own thoughts and impressions from that worldwide trip. The resulting EP has that travelogue quality to it, and made it a perfect outfit for our fourth release, as continuing pandemic issues are driving our listeners further and further out to the deeper fringes of sound and a dip into the ambient pond. Meditations and improvisation.

All tracks written and performed by Alexander Albrecht - Extra percussion on Denver Chimes by Lachlan McGeehan. Mastering by Corey Kikos. Art by CM-DP.