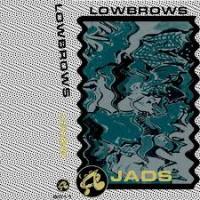 These are the first recordings made by the Lowbrows. They were produced over two separate Saturdays toward the end of 2019. All tracks are made entirely by using samples taken from a single mid-60s garage rock record.

“Jim and Tony had been busy with preparations for something else when the weather turned badly. They were hoisted up in the shed for weeks waiting for a changing chance. They were like witnesses or hostages, they’d have said, if anyone would even have thought to ask. There was nothing much to do but learn how to operate the machines that were being stored there by the local Evangelical church. Not least as the machines blocked the hiding places. There was a small box of records but almost all had been soiled so they used them for fuel. The Jads wasn’t too bad -VG really- and so they used that as a test device for some of the machine functionalité. It was a few hours of arguing in total before they made songs and were rescued by someone claiming to have the answers. It felt weird being outside but they were not typical so the only thing that made them OK, I suppose, was using the machines and songs etc. It was a long night a few nights later and they fought everything threw.”

Praises be to the Jads!
Next are the Victors!