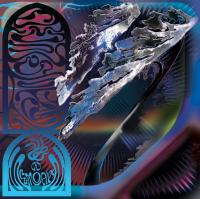 It feels like it’s time to thank the people who continuously give me energy. No matter in which form. Whether as the music they produce, hugs, compliments, mistakes I’ve learned from, encouragements, critical feedback or just listening. This release goes out to all the people who have supported me on my path of life so far. I am tremendously grateful for the life I am allowed to live.

The number 7. It represents my numerology and there are seven chakras in the body.

As a child, my father often played something on the guitar or on the synthesizer to me. One melody of it was the one from “Time Shifting”. I took a part of the melody and tried to create my own version, stretched in space and time.

I have experienced that I can make music very well when someone else is sleeping in the room. That was the output from “While Dreaming Deep“.

“Arecibo” is a message sent by humans into space. My interpretation of it originated in a small town of the Paci c Ocean in Chile.

If there’s one thing that de nitely makes my heart race, it’s co ee. On my way to Berlin I once had too much and had to convert this energy into a title. So I had a nice “Ca eine Morning”

You can create your reality the way you want it to be. Faith is the strongest force we have. Create your own “Tidentity.”

It was my rst time playing with VCV Rack and ended up producing kicks, „VCV Kicks“.

A friend of mine asked for Gabber tracks on Facebook and the post got “8 Likes 39 Comments”. Somehow I felt like making one track out of it too.