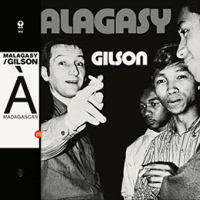 Paris, May 13th 1968. There was a general strike. One last plane left the runway, strewn with flaming oil drums. On board were three jazz musicians wondering whether they would be able to return home one day. But for the time being they really want to make it to Madagascar where concerts and workshops with young local musicians were waiting for them. Pianist and bandleader Jef Gilson was accompanied by his bassist Gilbert "Bibi" Rovère (Martial Solal Trio) and the young drummer Lionel Magal (Crium Delirium). Gilson, who already had a reputation for finding new talent (it was thanks to him that, amongst others Jean-Louis Chautemps, Henri Texier, Jean-Luc Ponty or Michel Portal first became known) was literally blown away by the standard of the young Malagasy musicians, all capable of imitating their American idols by ear. Their names were known only to jazz fans on the island; Serge, Allain and Georges Rahoerson, Arnaud Razafy, Roland de Comarmond, Joel Rakotomamonjy, Alain Razafinohatra, Samuel Ramiara... Gilson then had a vision: he wanted to encourage them to play jazz which was truly Malagasy and which would find its’ soul in the island’s culture and traditional instruments (Sodina flute, valiha, various percussion instruments...).

He would go back to the big island three times, in March (with cellist Jean-Charles Capon), in October 1969 (alone), then in February 1970 (as a trio with guitarist Raymond Boni and drummer Bertrand Gauthier). The two trips in 1969 would lead to the sessions, recorded on a simple ReVox with two Neuman microphones, which would make up the essential part of this mythical album entitled "Malagasy", and first issued in 1972 on the Lumen label, and then reissued, as early as 1973, on Palm, Jef Gilson’s own label.

Apart from the last track, recorded in Paris in 1971 with Malagasy instruments brought back from trips by the trio which would play on the avant-garde "Le Massacre du Printemps" (Futura), all the other compositions on the album are by Jef Gilson, Jean-Charles Capon and the young saxophonist Serge Rahoerson. There is also a cover of a song issued just a few months earlier and that the Malagasy musicians had only heard through bits and pieces played by Gilson on piano: the song is "The Creator Has A Masterplan" by Pharoah Sanders, and it is one of the most wild and mystical versions you will ever hear.

In May 1972, Madagascar itself would be the theatre of youth revolt. And the composition "Avaradoha" by Serge Rahoerson, the second track of the first side of this album, would be the anthem of the revolution on the streets.