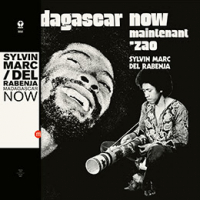 While he was working on the repertoire for the new version of his group Malagasy, with young Malagasy musicians he had met in Paris in 1972 (and who can be heard on the album "Malagasy At Newport-Paris"), Jef Gilson realised that two of his new discoveries, in addition to being established polyinstrumentalists (who both had sharpened their skills in the legendary seja-jazz band from La Réunion, Le Club Rythmique), were also skilled composers. They were capable of reinventing jazz and traditional Malagasy music, adding influences from the new generation inspired by pop, rock and funk into the mix. He offered them the chance to share the two sides of an album recorded on his own label, Palm, alongside their compatriots. Ange "Zizi" Japhet, Gérard Rakotoarivony and Frank Raholison.

This is how Del Rabenja and Sylvin Marc came to record this "Madagascar Now / Maintenant 'Zao". The first side really showcases the valiha (a small Malagasy harp) of Del Rabenja who uses the occasion to pay homage to the sadly missed Rakotozafy, often called the Django Reinhardt of the instrument. His three compositions are full of spirituality and invite an almost trance-like state. But Rabenja is equally a very good tenor saxophonist and organist on the other tracks. The other side displays the full range of talents of the multi-instrumentalist and composer Sylvin Marc, who moves from bass to drums, from vocals to percussion and offers four compositions ranging from free jazz to cosmic groove.

At the same period the five men could also be found amongst the cast list of the mythical albums, "Funny Funky Rib Crib" by Byard Lancaster and "Soul Of Africa" by Hal Singer & Jef Gilson. Later, Sylvin Marc would play bass for Nina Simone on her album "Fodder On My Wings" in 1982, then join the team of violinist Didier Lockwood, while Del Rabenja would be part of Manu Dibango’s and Eddy Louiss’ orchestras for a long time and would even be at the front of the top 50 at the end of the 80s with David Koven. He would also be the special guest of the Palm Unit trio (Fred Escoffier, Lionel Martin, Philippe "Pipon" Garcia) on their first album, an homage to the œuvre of Jef Gilson, in 2018.