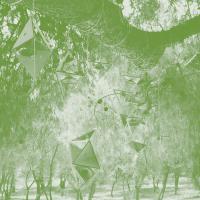 Lowercase music pioneer Steve Roden uses tiny “poor” objects like tin whistles, music boxes and toy harmonicas to guide a tribute to Greek architect and painter Dimitris Pikionis. Evocative, haunted stuff for fans of early Colleen or Machinefabriek.
In 2006, Steve Roden was invited to create “Oionos” for The Grand Promenade exhibition in Athens, which took place in various historical sites around the center of the city. This was intended to allow some level of dialog between contemporary artists, who were asked to create site-specific works, and their historical surroundings, which have underpinned European history for hundreds of years.
Roden pleaded with the curator to allow him to compose a work in response to Dimitris Pikionis’s Church of St. Dimitris Loumbardiardis, which was a few minutes walk from the main path of The Grand Promenade. Pikionis had designed the original promenade, and Roden felt that his small church and the path that led to it gave an impression of Athens - and the architect’s vision - that no longer exists on the main stretch.
To create a conversation with Pikionis, Roden wanted to make music that related to his ideas about craft, and his interests in indigenous culture as it related to modern culture. So he want to Athens’ museum of musical instruments and instead of using the proper instruments, raided a display case of musical toys, religious objects and other sound devices - simple things that felt more in line with Pikionis’s vision.
The result is a slowly shifting hour-long piece that marries scrapes and music box chimes with scratchy environmental recordings and insect chatter. Barely moving, it sounds frozen in time, retaining the atmosphere of the place and time and fixating on a single repeating moment.