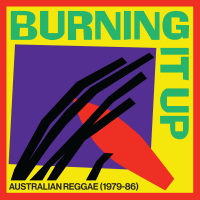 Austudy Records is proud to present it’s debut release Burning It Up: Australian Reggae (1979-1986). A compilation surveying the influence of Reggae on Australia’s preoccupation with Rock, Pop and New Wave between the years of 1979-1986. This selection of 8 obscure tracks originally issued on 7” records represent some of the earliest examples of Reggae sounds in Australian recorded music.