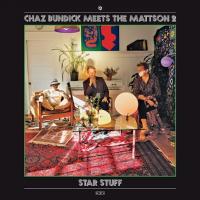 Given the state of modern music and its fabricated pop icons, what Chaz Bundick Meets The Mattson 2 achieves is a collective music victory in a new era of progressive soundscapes. World-renowned composer/producer extraordinaire Chaz Bundick (Toro Y Moi, Les Sins) has teamed up with the psychedelic-jazz grooves of The Mattson 2 for an album that unifies a trio's creativity into a refreshing project of unhinged sonic originality.

Oddly enough, this collaboration may not have happened if The Mattson 2 hadn’t forgotten a drum throne at an Oakland performance in 2014. The twin’s longtime friend and photographer, Andrew Paynter, came to the rescue and called his friend Chaz to ask about borrowing the throne. Jonathan, the Mattson drummer (who’d also never met Chaz), accompanied Andrew to Chaz's home in Berkeley where they were greeted by Chaz with a warm smile, a drum stool in hand, and Michael, Chaz's dog (which his Les Sins record Michael is named after).

The next day Andrew and the twins met Chaz at a cafe in Berkeley to return the gear. Over coffee they waxed about music, design, furniture, and skateboarding. After a series of hangs with Chaz in the Bay Area, the crew decided to join forces and schedule studio time for their newfound trio. And the rest, as they say, is intergalactic, mega-creative history.

In February of 2016 the relationship was officially christened the night they finished tracking their new record. And to tie the knot with flare, they scheduled a secret show at the Battery and a historical public show at the Starline Social Club in Oakland, where the trio performed all new music from the project for the first time live.

The group and the album, Chaz Bundick Meets Mattson 2, explores psychedelic, jazz, and improvisatory influences ranging from Afrofuturistic Sun Ra, to electric Miles Davis, to groove-fueled Serge Gainsbourg and The Zombies. Grounding the album are break-beats, synthesizers, acoustic strums, and guitar fuzz reminiscent of David Axelrod and Arthur Verocai. With cosmic structures, timeless influences, rich harmonies, and melodic interplays, the trio brings an intergalactic edge to both their live shows and an album worthy of repeated visits.