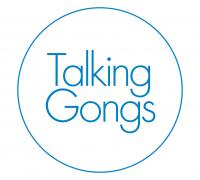 When one mutes the direct image of "Floris and his homemade synthesizer" and replace it with a more panoramic take, only then Vanhoof's very and personal artsmanship shines through. I mean, Vanhoof creates beautiful electronic music, of which for instance "De Karekiet van Karakas” is a fitting example (released as part of a split LP with Keith Fullerton Whitman by Shelter Press in 2013). But next to this purely musical work, Vanhoof’s very specialty is to create installations, holistic environments one has to inhabit, or at least walk through. Calling a world that is so simple and direct, yet therefor maybe a bit difficult and multi-focal to grasp. A world that translates okay on record, but works completely in Vanhoof's multi-media works. Of which this CD is a statement.

On this 30 minutes recording, the sounds produced by sending electronic signals through two orchestral gongs interact in a garden setting. The recording, made during sunset, reveals a world of electronic tones, birds, the wind rustling through the trees, a gallery owner, a slamming door, a passing train, and neighbors talking. One thing this installation shows us is the fact that not only one is witness of the magic of sound trough a conductor and of a poetic - almost archaic - image of two orchestral gongs exhibited in a garden, but one is also drawn closer to the musicality of the environment. Not unlike a Japanese Rock Garden, yet more playful, direct and maybe even … simple.

"Installation in which automatically resonating gongs hang in two metal frames. The gongs function as loudspeaker membranes that translate pre-recorded vibrations into sound. As the signal alternates between both gongs, these disk shapes seem to communicate with each other. With this installation I found a way to translate the electronic sounds that I play on a modular synthesizer to a museum context. Vibrations make reverb while traveling through the shiny metal alloy of the gongs. This enhances our spatial sense of the two-dimensional disks floating in the cubes.” (Floris Vanhoof, 2016. )