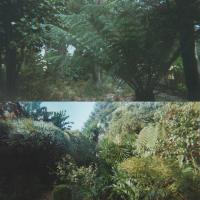 LIEVEN MARTENS aka DOLPHINS INTO THE FUTURE。ポストカードのセットとダウンロードコードによる作品。

For a while I considered starting up a postcard reissue label. Being a fond collector of these - more and more obsolete (and i say this without any whif of nostalgic philosophizing on redundant formats) - miniature art forms. Especially the “private press” environment (c.q. any local photography amateur who sees fit to reproduce his creations into cards, and drop them off at the town square’s newspaper stand) holds many a great view on our world around us. True composers never rest and are, sometimes, invisible.
But so far, this plan remains safely stored in public.

However, here’s a series of images, not reissues yet self-captured.

A set of seven postcards and a DL code. The postcards each reflect on compository aesthetics and shadows, conceptualizing (Lisbon) gardens, the beautiful craft of wine-making, and fire. The downloads are outtakes from the backcatalog and two previously unreleased tracks.

1. Coral Groups (previously released as a handcut 10, december 2016)
A live concert piece for 32 channels with an undefined duration.
Various found objects, electronics, piano vignettes and field recordings are put into relation with each other in an improvised way, creating a panorama that's both random and directional. I presented this piece between early 2013 and spring 2016, in Finland, Sweden, Japan, Mexico, United States, Italy, Germany, Denmark, United Kingdom, Belgium, among other.
The excerpt here has been recorded close to the final performance of the piece, when things started to come together quite naturally. Recorded live at Gold+Beton Gallery, Köln, Germany, november 2015.

2. Pã'ua (previously released as a handcut 7", october 2014)
Humble is the melody / which flows the giant clam

3. A Village Scene
A completely agreeably toned drone song, in danger of being a bit nostalgic and/or easy.

5. The Bells From Above (previously released as a handcut 7", december 2013)
Tracing the volcano. In the Divehi language, lava means “a song”.

7. O Recife (outtake from the soundtrack of "As Canções De Pele", a film released december 2013)
As Canções De Pele (The Songs Of Pele) is a film about an imaginary volcanic island. Its features are explained / being sung by the main character Pele, the deity of volcanoes. The footage was shot between september and december 2011 on the Açores Archipelago. The film was edited, mixed, and provided with a soundtrack, march 2012.
レーベル #: Edicoes CN (BEL)