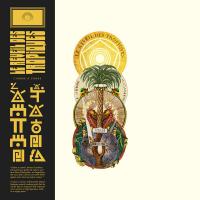 After almost 10 years of existence, two studio albums and a series of live recordings, the exploration by Le Réveil Des Tropiques of the psychedelic worlds takes this time the form of a hybrid record mixing recordings from different eras and contexts: scenes, studios, abandoned factory or even in the middle of nature.

Conceived as an experience of multiple lives, the arrangement of these elements by superimpositions or contrasts echoes the different experiences of the soul as well as the encounters that each makes (or re-made) during his passage on Earth and that does not not only due to chance ...

Named in reference to this mechanical device to synchronize several displacements, and illustrated by Valentin Pinel through the reinterpretation of an engraving of alchemists of the seventeenth century, "L'Arbre à Cames" will lead the listener between several grids of readings that he will be free to interpret and apprehend both as a heterogeneous entity and as a single piece. "