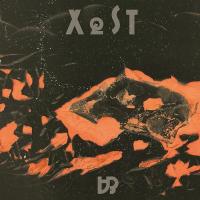 AE presents two 12"s of rhythmic hypnosis from the eXquisite CORpsE related project, XqST (Robbert Heijnen and Debbie Jones). AE logic symbols that stand for "For All" and "There Exists" is a deep and meditative journey moving further into the more abstract territories that Robbert and Debbie previously explored with eXquisite CORpsE.

Most of the material on the record is selected from improvisations Robbert and Debbie recorded in their home studio in Vancouver, BC during 2003, except for "SDLY" which was recorded in the Netherlands in 1996.

The material came about naturally, mixing previously collected loops and sounds with improvisations and manipulations on further electronic equipment. During the time of these recordings, Robbert and Debbie would put their kids to bed and retreat to their home studio, where making noise together was a way to relax.

These eight tracks are a coherent document of the free-flowing experimentation and musical symbiosis shared between Robbert and Debbie. Created for each other, now to be shared.

D Tiffany :
"This is beautiful, healing music that brings with it a very special story about partnership and collaboration. So excited to be able to play this record and share it with the world."

Yu Su :
"This is so great I’ve listened to the whole thing so many times!"

GILB’R (Versatile) :
"This record is wicked!"

Temple Records :
"Overwhelmed by the sonic ecosystem in this record. We are such big fans of anything PWOG related and this is yet another special addition to their cannon. Big ups to Isla for unearthing this fascinating release."