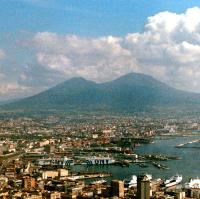 LIEVEN MARTENS MOANA aka DOLPHINS INTO THE FUTUREの近作２種。到着しました。

A year ago I went to Naples to record Mount Vesuvius and the Campanian volcanic arc. Being there, I noticed pretty soon that the real volcano is actually the city of Naples itself, and its people. Blowing their natural mirror out of the water.
Natural recordings are indeed beautiful to listen to. But it is not my ambition to shape an utopian world. When the recordist deliberately edits out all other sounds he might just be another reactionist.
Mic rumbles? Of course, since you’re listening to a simulation. And I don’t want to be the one to take that sensation away from you.

The recordings of Naples, a larger than life magma chamber, are energized by recordings of various themes in Ghana, recorded in February 2019. Wild juxtaposing. Preacher men, 10.000 fruit bats (in e.g. Samoan tradition, these bats are a symbol of freedom), slave songs, works songs, and vehicles. Animals, mango trees (also a symbol of freedom), and the sweeping by the house-personnel. Bush drinks and - meat. And saviors.
A metaphorical volcano.

On these two volcanoes, one God reigns. Both on and off-scene.
On both volcanoes, He chased away all the other deities. Yet only front stage.
In the back, a myriad of systems and codes is wriggling like a giant termite colony.

Thus we have the female (the volcano) and the male (god). A classic tale set to a backdrop of lies and truths.

These recordings transcend their original locations. Location-based field recording is anyways, a though nut to crack. Aural postcards, … sometimes so tedious. The recordings featured here. They represent ideas and plans. And they represent myself as the recorder. Obviously.
It’s the energy invoked when sound and speculation fuse.