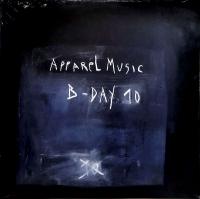 In the special occasion of our 10th birthday we felt that we had to create something really memorable, bringing together in two vinyl some of the most influential artists who took part in the making of our history and some new ones, yet prominent and successful. All of them had a fascinating mission to accomplish honouring the concept of ‘Jazzy’ which is the notion and approach set ten years ago as the fundament of Apparel Music and we can plainly say that they’ve won the challenge, brightly. They produced eight stunning tracks which represent an ideal declination of the requirements you need to enter the AM family. The roster of artists behind this record perfectly represents the international soul of the label and very much speaks for itself, from our head honcho Kisk to ‘The Voice’ Robert Owens, our longtime family members Ivano Tetelepta & Euge`ne Latumeten, the Swedish Salary Boy, the great Tuccillo with his recognisable style, the American Fred P who’s music is the best introduction of his abilities and needs no further presentation, to the youngster Chevals with his bright talent. The final side then is the debut’s side with the iconic Art Of Tones who’s career as a pioneer of dance music speaks for itself and last but not least the marvellous duo Marcel Vogel &amp; Tim Jules, also new to the AM family, who’s baptism fulfils our high expectations. A list of virtuosos worth an All-Star Game! The opening track is ‘Your Face’ by Kisk &amp; the supreme and unrivalled voice of Robert Owens, with a bunch of great musicians who took part in the creative process: the Cuban Gendrickson Mena (trumpet, Saxhorn), Max Lagana` (Bass) and Nate Lotz who
レーベル : APPAREL MUSIC (UK)