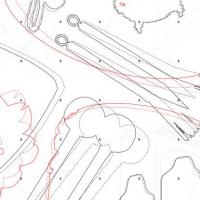 9ms is the duo of Simon Popp and Florian König. On their wide ranging debut album ‚Pleats’ the tech-savvy drummers offer grooves from the dubbier realms of World Music and Krautrock - some meditative and light, some thick as wall and steady as a clock. The album was recorded live in a large wooden hall in the Bavarian Alps with only three microphones. Using various infrared and magnetic field sensors, Popp and König were able to translate their movements into control voltage, which they then used to trigger and tweak synthesizers and a myriad of effects. A way for two humans to become one with their mystic machinery.