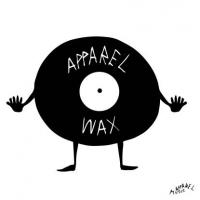 This time you'll find the Wax's #plectrum with the vinyl; a little gadget to stimulate your musical fantasies. (only for the first 200 orders!) Tracklist A1. 010A1 A2. 010A2 B1. 010B1 B2. 010B2 Shortinfo: Four years and ten releases later we can say that Apparel Wax -the vinyl-faced hero- has been able to always renew itself and its sound because, as our manifesto says, we try not to submit to any genre. We wanted every release to be the outcome of a long research through uncommon sounds and APLWAX010, yet again, is an unidentified sonic object picked up by our radar. The last one though! We didn't plan it, we just felt like the time has come -eventually- to close this beautiful chapter. More than one factor led us to take this decision: the progressive concern about the planet (therefore the impossibility to keep producing plastic bags and gadgets), the desire to leave at our peak and to invent something new are just two of them. The constant process behind the renewal of our sound -which we embraced ten years ago with the birth of Apparel Music- sometimes passes through hard choices and we need to feel again that sensation of 'void' in order to create something fresh, different, as we did when we started Apparel Wax. We won't drag our masked hero to a point of sonic stagnation. We'd like to send you all a big greeting and a heartfelt thanks for every second of your time spent listening to Apparel Wax, it literally meant the world to us. What was initially just a bold idea became a musical reference point for many people around the world, and we will be forever grateful to y'all because, without you, it would have never been possible. Finally, a huge thanks to all the artists involved in the project. They contributed with their art to a bigger cause, the biggest: music. YOU are the true masked heroes, you are Apparel Wax. As for us, we'll live on and our sound too. Our ideas, our passion and dedication for the one and only thing that re