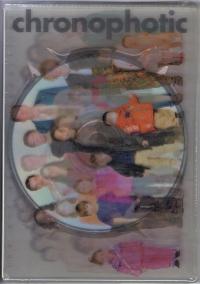 The full title of this work is Chronophotic: Moving Stills: CensusQ: L'Arc d'Apparition, and it consists of one DVD and one CD, the second providing a soundtrack for the first. It is John Oswald's first "full-length" (the term is somewhat misleading here) picture and one of his simplest conceptual pieces. The film, described as a "moving still production," consists of pictures of approximately 70 persons of all ages and sizes, slowly appearing and disappearing over a white backdrop. Each person has been photographed twice in the same posture: dressed and naked. Clothes appear and disappear on each person, adding an extra number of possible combinations. These people are not moving; imagine instead about 140 faders (each person, dressed and undressed) slowly manipulated by Oswald, either individually or in groups. The DVD has no soundtrack and is indexed in tracks of various lengths, programmed to segue seamlessly and endlessly. The CD of the set is titled "Whisperfield" and consists of a 66-minute arrangement of soft whispering voices, presumably the voices of the unidentified persons in the film. They whisper in English, French, Japanese, Spanish, and possibly a few other languages. Most of what they are saying floats at the threshold of audibility (the subject of Oswald's previous recorded work, Aparanthesi), but what little filters to the foreground relates to physical descriptions and intimate stories. The piece works very well in its intended use. As a stand-alone piece, it generates a strangely reassuring atmosphere. But the work as a whole has only a short appeal, its inner workings becoming too obvious too soon.