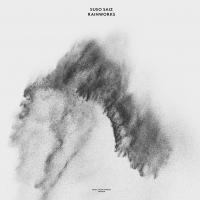 Following last year’s compilation of archival recordings by Suso Saiz titled ’Odisea’, Music From Memory are thrilled to mark their 20th release to date with an album of new works by the Spanish electronic music pioneer. Recorded in Madrid between January and February 2016, this is Suso Saiz’s first release of new music in nearly 10 years.
.
Titled ‘Rainworks’ this double LP release was originally part of a commission from a Canary Islands water company. The first ideas for the compositions developed from a documentary that Suso had seen suggesting the possibility of water molecules having their own ‘memory’. As Suso himself explains, he became fascinated with the “possibility of an eternal being, changing its cyclical condition from solid to gaseous state, travelling through and between the Earth and the Sky, as a witness and keeper of the true history of Earth and Mankind”.

Suso, his son Emil Saiz and pianist Raph Killhertz set out to explore this metaphysical process of cyclical movement through music in ‘Rainworks’. Developing from the original commissioned tracks into a much more elaborate project, the album’s process became something of a mystical journey, drawing on aspects of minimalism and modernism. The music is also embedded in textured natural soundscapes and spoken word passages which were recorded and processed by Suso himself.

Despite having the immediacy of an improvised piece, ‘Rainworks’ was in entirely composed by Suso. Whilst on one hand it appears very much as an electronic album there are in fact many acoustic elements to the recording. A resonant piano (a grand piano re-amplified using its resonant box and harp to generate effects) as well as guitars (with simple effects) are played in Suso’s inimitable hypnotic way, slowly drawing the listener into a transportive state or lucid dream.