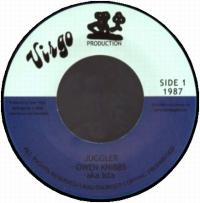 Owen Knibbs was born november, 10th 1966 in Mt Salem, Montego Bay, Jamaica. He grew up with his mother (mama granty), three sisters and nine brothers, Owen was the youngest. He was introduced to music at a tender age by his mother; she would host parties in the back yard every weekend. She owned a stereo vinyl player and Owen would play the records for her.

While attending St James high school, he met a friend name Martin Reid in nine grade and they became “Little Ista and Billy Dread”. In 1987, his friend Leon Virgo decided to go into production and also produced Owen’s first and only recording on his label Virgo Production: “Juggler”, a song Owen has written in 1982, a song about poor people hustling and working hard to survive. The track was played and arranged by Jimbo and was recorded at Aquarius Studio at Half Way Tree in Kingston. With not much experience Leon Virgo gave a respectable distributer to distribute the song, but they only distributed a few hundred copies and told Leon the song was not selling.

To make matter worst Leon decided not to continue producing music. Frustrated and disappointed Owen went back to Montego Bay. When Owen was spotted by us, he could not believe that after 29 years a French label wanted to repress the “Juggler” and make it available to collectors as people were selling it for as much as 200 euros all across Europe, Japan and South America. Owen was shocked. Since the “Juggler” reissue released in March 2015, Owen Knibbs started to see his journey on the move again. He get to record the “Juggler” in dupplate style for sound-system in Japan and Europe. He just released his EP Last Call with seven tracks available on digital download. Eric from Black-Catalog invited him over Europe on a six weeks tour in April 2016. When we ask him how he would like people to remember him, his answer is “like how they remember Junior Delgado, Hugh Mundell and the great Sugar Minott”. The juggler a juggler again…Jah Rastafari !” Owen Knibbs