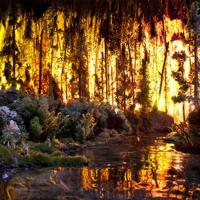 ''Worthwhile albums tend to be as much about the process of making them as they are about the end products themselves. One can almost hear formal, technical, even philosophical questions being asked and answered on them in order to arrive at something personally and politically new for the artist. "A Box Full of Magic," at once sprawling, cosmic, and psychedelic in the best of ways, follows in this album-making tradition. It is a record steeped in off kilter percussive time, live recording, occasionally summer cloud-paced tempos, and lush, emotional, melodic instrumentation. "A Sunrise On the Front," the final track of the record (and a composition crushing in its beauty), encapsulates much of this: recorded live on a Rhodes, the melody gives voice to the paradoxical sense of hope even during the pathology of war. Such conceptual ambition fits perfectly well within the capacious vision of Mathew Jonson's Freedom Engine, a project whose very name seems to explore and allow for the conceptual paradox and complexity of approaching freedom through the engine of technology. In a fundamental sense this tension between freedom and machine informs much of the album proper. Desiring to break out of his old ways of production and the boxes that went with it, the album abounds with fresh fascinations in things like the sound of mathematical equations, quirky time signatures, and experimental phrasing through intuitive timings to unlock a sense of magic, play, and spontaneity. There is, likewise, an interest in the liberating potential of deconstructing old sounds to make new ones, as Jonson applies techniques like innovative noise gating on classic drum samples to create space age percussion. At other moments, on "The Very Strange," for instance, air itself is sampled in field recordings to create unnatural percussive patterns. As is often the case with Jonson's work, an encyclopedia of machines and synths are employed in the making of 'A Box Full of Magic," but what is perhaps new here, and in keeping with the dialectic he traces between freedom/engine, is that there is a non-mechanistic, spontaneous impulse at work in the recordings. While it is not a live album, it has an at times spiritual and organic inclination despite or perhaps because of the way his panoply of gear--Prophet 5, cs60, VCS3, et al--attempts to capture dream-like tonalities that can reach poetic heights on a track like the aforesaid "Sunrise" or morph into an almost diabolical, Lynchian dimension on "An Evil Charm (Where Is the Forest)." But while it is tempting to get lost in the trees of synth-arcana with Jonson's work, we should not lose sight of the forest here: With its openness to new ideas which in turn generate an album teeming with them, "Box Full of Magic" helps to expand the sonic vocabulary of contemporary dance music.''

Mathew Jonson lives and works in Berlin. He has been experimenting with electronic music since 1986.
レーベル #: DEKMANTEL (HOL)