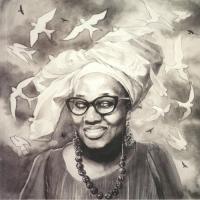 Mow Records proudly presents L’enfants De Kita, the third album from a series of five, all produced by label owner Mowgan. Each album features vocalists and performers with African heritage, channeling Mowgan’s passion for the continent’s diverse sounds into vibrant, highly emotive productions. On L’enfants De Kita he teams up with Fanta Sayon Sissoko, a female performer from West African nation Mali. Based in Toulouse, where the album was recorded, Fanta’s musical roots go deep - her father played guitar and ngoni for Baaba Maal and her grandmother is Kandia Kouyaté, one of Mali’s best-known griot singers.

Mowgan always dreamed of working with a female singer from Mali, enchanted by their vocal style. After moving back to France a few years ago he bumped into Eric Diaouré, an old friend who he worked with in his teens. Eric is also a musician and just so happens to be from Mali. Mowgan revealed his ambitions to Eric and a meeting with Fanta was arranged - within a few days they were in the studio together.

Like the other albums in this series, L’enfants De Kita is a fusion of Mowgan’s love for African music and his penchant for electronic sounds. Fanta’s raw, affecting vocals are complemented by Mowgan’s considered production throughout with additional instrumentation from a range of performers, including a group of schoolchildren on ‘Tubani’. Featured artists include Solo Sanou (whose album ‘Soya’ was the second release on Mow Records) playing percussion, Mamadou ‘Madou’ Dembele, a multi-instrumentalist who plays ngoni, Yohan Hernandez on guitar and bass plus Madani Touré aka Chanana (a famous Malian rapper from the nineties) contributing to lead vocals on the album’s title track, with Tim Xavier handling mastering.

Mowgan’s approach to creating albums is to get a vibe going with the singer, produce a batch of songs and then select the best seven for each LP. It’s a pressure-free attitude that has led to some truly heartfelt productions, which encapsulate the purity of the creative process when it’s liberated from rigid constraints. You can hear this freedom of expression throughout L’enfants De Kita, Fanta in her element as she sings with passion and grace across all seven tracks.