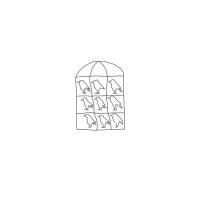 Ubaldo’s music is chaos and calm, like rivers of sweet lava erupting from a volcano.

Ubaldo is able to transport us to the most remote sounds, to places we have never been, but we are made to feel at home. He uses ambient, experimental music and minimalism with the simplicity of the masters of the genre to express textures, dynamics and melodies that capture and inevitably lift you. One of the warmest and deepest albums that we will hear this year.

We at Urpa i musell are pleased to present our new release, the third album by Ubaldo, Casa [UiM 004]. Ubaldo is the most personal project of Andreu G. Serra, the curious musician from the Ebro Delta, currently living in Brussels.


Andreu has a variety of music projects to his name, each with a very different direction. In Bimbo Picasso he demonstrates a modern look at his punk roots; whereas Or Sobre Blau —collaboration with Kiran Leonard— is an intuitive dialogue established between two very different guitarists in the present day, where understanding and incomprehension complement each other. With Ubaldo, Andreu delves into his current frustrations and future yearnings.


Ubaldo’s second album, La pèrdua de l’estat (2017), was a genuine discovery, both by the label and the Discos Paradiso store. That is why it is a privilege for us to be part of the release of his third album.


Casa (‘house’ and ‘home’ in both Catalan and Spanish) is presented as a record of change. Andreu seeks freedom to make music and for that reason he has lived in several places over the last few years. This will involve unavoidable costs, such as a complex relationship with ones home, wherever that may be. This album was conceived to coincide with the arrival at his last destination —Brussels— and became the sound diary of that period.

At that time, Andreu was working on the renovation and extension of a friend’s house on the outskirts of the city. He did various tasks there: clearing the garden, trying to remedy an old, diseased tree, restoring burnt and crumbled walls, building various wooden buildings, etc. Each action became a lesson that went beyond the simple task at hand.


Casa was made while a house, and a link to the new place, was constructed, far from the Delta. The album is a meeting point between the two meanings of ‘casa’: the building we inhabit and the place where we feel we belong. In other words, Casa is the place that Ubaldo built to achieve a balance between interior and exterior.

When everything changes around us, and nothing seems stable, we tend to go into seclusion. During the processes of introspection we tend to focus on the most essential. This is the case with Casa. Andreu’s expansive capacity here is reduced to more precise and elementary gestures. The expressiveness that is so characteristic of him is concentrated to the essential, whilst avoiding formal perfection. The result —a seemingly imperfect reduction— cracks the congenital abstraction of music and gives us a glimpse of the naked Andreu behind it. It is unheard of to be as candid as he is. We feel truly privileged to present this record; we hope you enjoy it too.