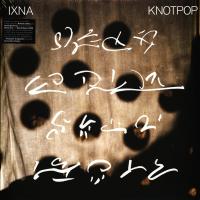 Knotpop is a revelatory lost album of deviant new wave from San Fransisco duo IXNA. Like Brian Eno and The Flying Lizards, the album is a sideways and inverted take on pop music. Jay Cloidt and Marina La Palma were students of David Behrman and Robert Ashley at Mills College, inspired by their infamously irreverent faculty to nudge the avant-garde out of its stuffy tweed and into something more exciting, something clad in denim & leather. Recorded at the Center For Contemporary Music at Mills in 1981, the album combines Cloidt's studio wizardry, sampling abilities and vibrant bass with La Palma’s expressive vocals, and love of made-up and invented languages (Esperanto). IXNA only released one 7" during that time, featuring two songs from this unrealized album, which became sought after over the decades. The discovery of Knotpop will feel like manna from heaven for previous fans, and a welcome addition to the cannon of avant-inverted-pop ur-classics. Concentric Circles is honored to present Knotpop to the world for the first time. Mastered from the original reels.