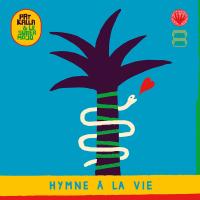 “Pat Kalla & Le Super Mojo propel us into a whirlwind métisse of African
groove and Caribbean funk, Afro-disco, Afrobeat, Makossa ... (Their music) dances with the musicality of political poetry, all expressed through a storyteller's Creole." (Fip)

Hymne à la Vie Pat Kalla's second full-length LP out on Heavenly Sweetness is not only as the title has it, a hymn to life, it's also a fine showcase of his band, the "Lyon-based groovers," le Super Mojo and a select group of guests from West Africa (DjeuhDoah, Doctor Lass). Parisian singer Lieutenant Nicholson joins DjeuhDoah to perform a touching duet on the closer and West Indies singer/songwriter - and fellow Heavenly Sweetness artist - David Walters shines on the LP in a lilting pop-funk number drenched in a luxurious groove.
Add to this the delicate, sophisticated production pallette of the DJ/producer Guts - another Heavenly Sweetness labelmate - and you have a release of subtle, satisfying power.
Throughout his multi-decade musical career, the singer/songwriter and MC born Patrice Kalla N'Galle (his Cameroonian father named him after the assassinated Congolese political leader, Patrice Lumumba) has created music that responds to his African heritage in strikingly creative and innovative ways.

When asked to introduce himself during a radio program, Kalla said that he was a storyteller, a singer of "Black-music" and the MC with Voilaaa Sound System, an Afro disco project led by the producer Patchworks. Their track «On te l’avait dit » was a massive success in France and elsewhere and remains Pat Kalla's calling card, among many, to this day.
Pat Kalla's music is a unique mix of African groove and «Chanson française» with a naïve poetry you can find in African tales. He is also a vessel to convey the musical culture of his ancestors: the Cameroonian musician, Manu Dibango's « Soul makossa » is a strong influence for the artist. In 1996, Kalla was taught how to play West African percussion instruments - the dun dun, djembé in traditional, polyrhythmic styles -using this knowledge to his recordings with his frist group, Boulfalé. "The body can speak of so many things," Kalla recently shared in an interview. This includes the history of an entire continent. "Africa has suffered so much over the generations," he added. And yet, music allows for transformation. "We're able to keep something of that melancholy, that
sadness, while adding a little touch of lightness, which comes through the
body and dance; dance makes everything in the world better, it's a kind of
medicine."
Indeed, there is a lightness to much of Hymne à la Vie - both in terms of
instrumentation, the light picking guitar and punctured drums - that resembles movement of a dance; moreover, this music is made for the stage, and a dancing crowd before it.

Dance also operates on the album as a lyrical theme - in, for example, the
lilting 80s pop-funk of "La Vie C'est Jolie" featuring David Walters - and as a motif in terms of how Pat Kalla and his team of seven respond to the various musical influences. A crass mish-mash of geographical source material this is not. Take, for instance, the playful love song "Cumbia de Paris" whose title alludes to a form of music born in 17th century Colombia, originally inspired by Guinean dance. On "Cumbia de Paris" Kalla gently repeats his entreaties, while the production lets a certain dub influence to seep into the mix.

Or see, for example, one of the album's definite highlights, "Le Métèque" - a derogatory term for an immigrant - which reworks the Georges Moustaki
classic from 1969 that was later reprised by rappers JoeyStarr and Rocé in 2006. This song has a particular resonance in French musical culture, as a statement of anti-racist defiance, where the singer takes on the slur,
embracing it as a form of self-definition.
Here, the Pat Kalla/le Super Mojo interpretation of the song is joyful, rather
than furious or menacing, opening with a groovy bassline and popping
percussive interplay that brings to mind Sly & Robbie's 70s Jamaica - a nodperhaps to Gainsbourg's 1979 reworking of La Marseillaise, or Grace Jones hits from just after.
Credit is also due here to the musicians in support: Nicolas Delaunay on
drums; Jim Warluzelle on bass; Julian Jan on guitar; David Marion on keys.
Add to the mix a constantly reinvigorating percussive presence with Mathieu Manach and an understated horns section from Thomas Le Roux on trumpet and Fermin Manoz on saxophone.
In fact, the Le Super Mojo crew has an eclectic music-making approach that resembles Pat Kalla's own, with an abundance of zest that manifests their musicians' invigorating curiosity and wide range of interests. Drummer Nicolas Delaunay, for example, elsewhere plays in a group with the tagline "from Lagos to Kingston," while saxophonist Manoz plays in a group dedicated to jazz from the 1930s and 1940s.
None of this should give the impression of confusion, or that awkward kind of music where normally discrete musical influences battle for dominance. The achievement of Hymne à la Vie lies in its seamless assembly of not so much musical genres, but feelings carried by various forms of music, as interpreted by Pat Kalla and his group. Another gorgeous song, "Calin Brésil" is a perfect example of this, sustained by an affecting horns/guitar/rhythm section interplay.

Such musical eclecticism mimics Kalla's motivations on Jongler - his 2018
Favorite Records debut - that he has said he hoped would operate as a
celebration of “sub-Saharan orchestras from the 1960s and 1980S, notably in the Congo, Cameroon and Nigeria, to recreate that atmosphere" with an "abundance of parts - including vocalists, trumpets, saxophones."
Hymne à la Vie is not a loud record, overflowing with sounds of instruments and orchestras of the past; it is quieter in mood, even if the work's musical and cultural foundations remain ever present, rich and complex and is thus a deeply affecting listen for this reason.

A unique fusion of Cameroonian poetry and Chanson Française. Think
Manu Dibango jamming with Georges Moustaki on the banks of the
River Seine ....