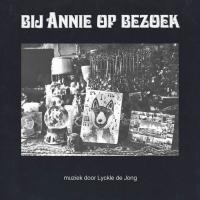 Lyckle de Jong’s debut LP ‘bij Annie op bezoek’ captures moments of his encounter with Annie. An elderly lady in her mid 80’s, who has been living in quarantine for almost a decade.

The album has a cinematic feel and inherents several interludes of Annie singing her favourite ‘Schlager’ songs, recorded live in her living room. It feels like entering a different world - Annie’s world…

About fifty years ago, Annie met her husband at The Camera, a movie theatre in Leiden. Both were working there at the time. One day Annie had to get something from the projection-room. It was dark, so she wasn’t able to see much. All of a sudden she felt a hand on hers, but strangely enough, she didn’t startle. She felt something very special, a feeling that has never left her, up to this day. It was the hand of her future husband. Exactly then he told her he loved her and had done so from the very first time he had seen her. This was somewhat remarkable; Annie liked the guy, Seban was his name, but didn’t really know him all that well, moreover she was a couple of years older and he was a Moroccan muslim living in the Netherlands of the 1960s. Nothing terrible, but regrettably the ’60’s was a different time. They still married and moved into a brand-new flat apartment in the Merenwijk in Leiden. A flat and neighbourhood that has since lost its glory. Annie and Seban often vacationed together in a caravan. They went to Morocco together, where Annie met his parents. She converted to Islam, but in her own way. She doesn’t wear a headscarf for example, but did stop eating pork. Annie and Seban were together for just ten years. Though the briefness of this period had nothing to do with their love for each other. This love is still present, despite the fact that Seban passed away years ago. In the living room she has a black-and-white picture showing him sitting next to their German Shepard Camar, on the footballfield down from the apartment. Both of them look proud. Every day Annie looks at it, at the happiest time of her life. “If it were possible, I would take them back immediately.