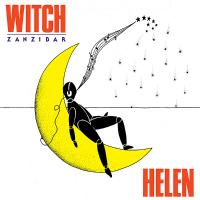 Dark Entries Editions reissue series continues with a double A-side of the first two Helen maxi singles, "Witch" and "Zanzibar", as a 4-song EP. Helen was an Italo disco studio project that consisted of various producers, songwriters, and vocalists from Italy in the 1980s. The first line-up included popular Italo producers Piero Cairo and Massimo
Noe, known for their work with Joe Yellow, Den Harrow, Pink Project, and Dharma to name a few. They were joined by prolific Italo session vocalist Elena Ferretti. "Witch" was originally released in 1983 on Out Records, a label distributed by Discomagic Records. Signature Linndrum and Simmons drums create the driving rhythm track while Elena's powerful vocals tell the haunted tale of a witch and her magic.
In 1985 the second incarnation of Helen recorded the song "Zanzibar". The vocal version was written by Ennio Ronchelli (Keyboards) and Roberto Barocelli (Guitar, Bass), with singer Daniela Paratici. This line-up was heavily influenced by the 'Afro' movement made popular by DJ Beppe Loda. "Afro" refers to the Cosmic musical trend of slower disco records featuring African drums and rhythms. The "Afro Mix" of "Zanzibar" was produced by DJ Daniele Losi and Roberto Lodola, with additional live hand drums and sticks by Nigerian percussionist George Aghedo.
All songs have been remastered for vinyl by George Horn at Fantasy Studios in Berkeley. The vinyl is housed in the original jacket from the "Witch" maxi single,
featuring artwork by Elena Feretti. Each EP includes a fold out poster with the nude female model