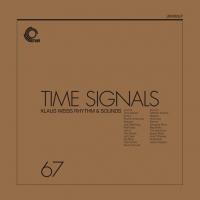 At the time ? and I think it’s still the case, Gareth was into Klaus Weiss. Weiss was the drummer for Munich supergroup Niagara, he could be found on library LPs we were digging up on the Conroy and Golden Ring labels, and his name would appear across early 1960s jazz LPs from Germany. His drumming sound was mechanical, peculiar, unpredictable and distinctive. But nothing he’d done that I’d heard sounded quite like Time Signals. It was more manic and experimental, and the sounds and slightly offensive rhythms burrowed into my brain almost instantly. It probably took about another three years to recover and find myself a copy, and even then I’d found the sounds completely at odds to anything else I knew about. A few years later Gareth also pointed out to me that this LP was all over Rockin’ With Seka, a jet set hardcore movie from 1980 starring Swedish sensation Seka and Big John Holmes. Obviously the sound department on the film got busy with Selected Sound as another cue from the LP Nymphe (Selected Sound 9077) is also on the soundtrack. But that is exactly what library music is for; Selected Sound produced these amazing library LPs, all beautifully recorded, sent them out in their shiny bronze sleeves around the world with rough guides to what they might be good for (see the original user paragraph below), and waited for the royalties to roll in.

Time Signals is probably the most desirable LP in the 9000 series catalogue. It sounds like nothing else and there are many high points, certainly something for everyone. And as musical tastes change and develop, Time Signals just seems to move along and fit. What seemed like otherworldly music to me two decades ago now seems like the norm. So here is Time Signals in all it’s odd glory, offering you a futuristic musical trip like no other.