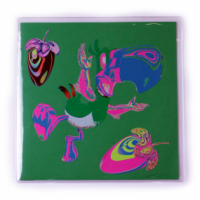 Aardvarck. The Pig. The Myth. The Legend. 26 years since his first record, he drops his most obscure release yet on the newly formed CROWD.

The Monkey Formula is a compilation of largely unreleased material, although one track was originally featured on a Music For Speakers CD compilation back in 2000. The record is a blissful drift into the looping, reverb drenched imagination of the nomadic Mike Kivits. This is the gentle and emotional side of Aardvarck's productions that we were briefly reminded of on his ANTI CONCEPT EP for Eat Concrete (2011).

The tracks here are from a selection of archived favourites put together for his friend, Amsterdam-based artist Abel Minnée . Too good to keep just for his own headphones and sensing a story needed telling, Minnée set up CROWD as a vessel for The Monkey Formula to exist in physical form. The 'monkey' reference seems to point to Kivits' self-proclaimed musical ineptitude and simplistic approach to production - this can (and should!) be strongly argued to the contrary, as the results contradict this notion entirely. His ability not to overthink, and go with his feelings (his own formula) seems a more fair basis of his monkey comparison... but he'd never tell you that. These are skills honed from decades spent falling in love with all kinds of music, endlessly chopping up loops and programming intricate beats. The deft placement of sounds in his work gives his music a honed sophistication and quality that runs throughout his all of his work.

There are eight tracks in total, with sound sources largely unknown (Robin Hood strikes again). The album is in large parts ambient - the strings heavenly , the chords deep and the few times the beats do roll they are in that subtle broken style we love him for. Varck is a classy bastard, and no mistake.

The fruity loopy design and concept was overseen by print wizard, Gilles De Brock. Using a specially designed print algorithm means that every sleeve design has a unique colour combination and printed number. The record itself is hand stamped, and hidden in the undersleeve are numerous screenshots of whatsapp messages written by the artist to the compiler during the process of putting together the release.

Aardvarck’s The Monkey Formula is a limited numbered edition release, so we advise ordering soon to avoid disappointment.