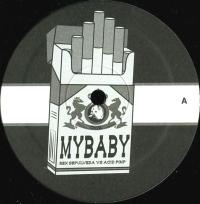 Detroit imprint My Baby returns with its third musical offering, a split release from two Motor City heavyweights, in the form of Rex Sepulveda and Acid Pimp.
This fledgling vinyl only label has got off to a superb start showcasing music from Detroit locals on its first two stellar Eps. With a focus on the underground sound of the city it resonates with global fans of quality house and techno and continues to do so here with four outstanding new tracks.
First up is Acid Pimp, a DJ &amp; producer who has been an integral part of Detroit’s music scene since the early 90s. His distinct sound saw him release a string of classic twelves on the Cheshire imprint, whilst his DJing took him from the warehouse parties of the city to international clubs like Tresor. He founded the ‘Friction Detroit’ night in his home town, hosting the likes of Ben Sims, Regis and Chris Liebing, and he co-founded the M-Nus sub label D- Records with Richie Hawtin and two other friends. The first of his two offerings is the superb ‘Re-Ak-O-Pan’, seven minutes of intense, industrial tinged techno with taut drums working alongside panning synths and static machine noise to superb effect. This is complemented by the looped excellence of ‘Lupe 09’, a rolling groove that is sure to lock in any dancefloor.
The flipside sees another of Michigan’s sons in the shape of Rex Sepulveda. Rex has a musical history dating back to 90s, he was one of the aforementioned friends that launched D-Records with Acid Pimp and Richie Hawtin and has released original and remix material on a number of imprints. His first cut here is ‘Rex presents Dvda’ a deep, brooding affair populated by rubbery, acidic synths and razor-sharp percussion. This is a pure early-hours number that is sure to twist up the floor wherever it’s dropped. Closing the package we have ‘Rexie’s Orgasm’ a spacious, and understated track that perfectly captures the echoing sounds of a cavernous warehouse space. This is a sterling package of quality und
レーベル #: MY BABY (US)