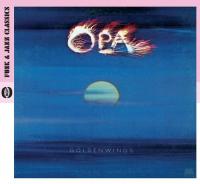 Opa was the brainchild of Hugo Fatturoso, the Uruguayan musical genius who was behind the South American beat group Los Shakers.

After time exploring the rhythms of Rock, he returned to his first love, Jazz, and formed Opa in 1969 with his brother Jorge and Ringo Thielman on drums. Moving to New York in 1970, they became Airto Morreira and Flora Purim's backing band, appearing on several of their early to mid '70s albums. Digitally remastered edition of this 1976 release.