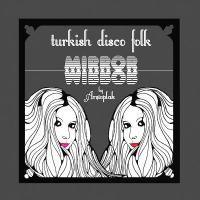 Arsivplak has long delved into the weirdest, most wonderful forms of psychedelia from Turkey throughout the last few decades. Metin Alatlı, Tayfun, Halit Kakınç, Ruacan as a producer, Arşivplak also reimagined Turkish folklore through a classic synthesizer on the sublime "Volga Nehri (Turkish Disco Folk)" in 2012, "Moog Edits" in 2015 and the new edit album after 4 years.. Whether it’s the moog organ or the electric-saz there are no casual players with each instrument taking decades to master and the label showcase these shared characteristics between funk-jazz and traditional Turkish disco-folk music." Here you go "Mirror". Enjoy..!!