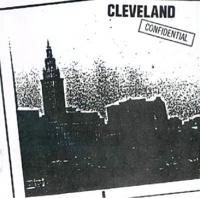 "When I say 1980 was a kind of dead zone in the Cleveland music scene, I can hear a collective, 'Isn't every year a dead zone in Cleveland?' Go ahead, take your Johnny Carson-era jokes and see what they buy you. Puff your chest about NYC in '75 or London in '76 or L.A. in '77 to some 27-something today. Allow me to save you face and remind you to add in late '70s Cleveland. Because when you revisit this comp of struggling, straggling, oil-stank Cuyahoga River rats, it might sound like the most intriguing current day, underground punk.

"Here was compiler Mike Hudson (Pagans) and pals/enemies circa 1978-82 (when these rackets were recorded), glancing out bar windows to see 'hoods of crumbling warehouses and factories that, unlike in England, couldn't be blamed on the Nazis. Musically, they were inspired by the fifteen (give or take) forefathers of that early '70s Cleveland legend (Rocket from the Tombs, Pere Ubu, Dead Boys, Peter Laughner, Mirrors, electric eels). But instead of seeing them sit at bars complaining about their failed major label deals, simply saw them sitting at bars. The later '80s Cle action that led to some excellent post-punk was still in the burbs, and the mainstream radio world that once had a few of its biggest offices in Brownstown had given up on the leather 'n' spikes stuff.

"Hence, the amazing, idiosyncratic, clanky shuffling that permeates all the Rust Belt rants herein. From AM-radio hook-ghosts (Severe, Keith Matic, Lab Rats), to a few lingering legends (Styrenes' shambolic cover of eels' anthem 'Jaguar Ride' and Dave E.'s own Jazz Destroyers), trashy sarcasto-punk (the Pagans, with Pere Ubu's Davd Thomas on gtr/back-up vox on 'Boy Can I Dance Good'), slimey proto-core (Dark, Easter Monkeys), and a prostitute or two – this 'scene,' as it were, might've been unseen in its dark day, but sounds surprisingly congealed on Cleveland Confidential.

"The soot-stained mood and context of this shit can't be replicated. And in a few decades it will seem as foreign as a gaslight. It might also seem like a dream. A time when humans could make music in abandoned storefronts, generally stave off the day job a few more months, and not just wander a barren landscape searching for food. Who knew end-of-the-'70s Cleveland would look so appealing?"