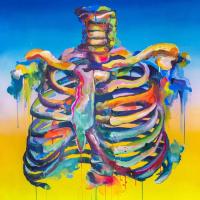 Time for some magic as longtime friends Guti and Djebali present their debut collaborative LP ‘Almost Finished’. The two artists decided to get together in Djebali’s Paris studio when Guti was in the French capital in April. With no real plan besides the chance to have a jam together they ended up locked into a four-day session, producing six tracks. In the months that followed, both men roadtested the music around the world, receiving positive feedback everywhere they played. Feeling they’d created something special, the decision was made to arrange a second session at the end of the summer.They found themselves fully immersed in another intensive recording session, where the idea was to make more music based on the existing tracks to create a cohesive body of work that would form an album. Guti and Djebali composed an intro, an outro, interludes and new tracks that complemented those they’d made earlier in the year. Artwork has been specially commissioned from Mister Piro, a protégé of world-famous Madrid-based artist Okuda. The result is a dancefloor-focused collection of 8 tracks (plus a digital bonus) and stunning artwork, which comprise the ‘Almost’ Finished LP