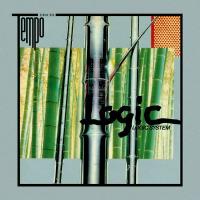 Tempo Dischi is an italian label created on a mission to discover and repress classics and rare italian gems of the italo disco, afro and cosmic scene. With the support from all the main players who has made that era magic, we work to put back on records stores shelves a piece of art that may have been lost but it’s still timeless.

The fourth release is a double A side release from the japanese electronic music pioneer Hideki Matsutake. Composer, arranger and programmer he is certainly known as member of the Yellow Magic Orchestra with Ryuichi Sakamoto from 1978 to 1982. In 1981 he launched his own project Logic System, producing essential songs like ‘Unit’ and ‘Clash’ that are included in the seminal album ‘Logic’.

‘The first half of the 70s was an era of practices and challenges for me’ comments Hideki ‘I started at the studio of the legendary electronic music pioneer Isao Tomita where i touched a synthesizer for the first time. I explored the Moog modular learning how to create sounds that nobody had heard. It was a stimulating period for music. Loads of the Japanese pop of this era was an active mix of different genres like jazz, fusion, electronic music, enka and more, and there were many experimental sounds. The experience with Yellow Magic Orchestra has been wonderful, but I've always had the desire to produce my music based on my own experiences.
The first synthesizer I purchased was Moog IIIc and then an E-mu Modular System. The Roland MC-8 was also revolutionary in creating never-ending and precise rhythm patterns. I produced the first album ‘Logic’ together with my partner Ryo Kawakami. At the time I was working with him on different projects. Inspired by the principle of transformation, we were transported by thoughts, musical contexts and experimental elements that guided us to the production of this record’

The B side is a special italo disco version of ‘Unit’ produced by the Italian studio team Mito, formed by Natale Bellotti, Italo Portesani and Stefano Secchi. The idea of ​​this remaking came from friend and colleague Stefano Secchi. I think it was 1982’ recalls Italo Portesani ‘I introduced the project to Natale Bellotti who agreed to participate as executive producer. The studio band of Mito was born. The sound of Unit was already electronic and minimal but we thought to make it more danceable and in the mood with the italo disco and electro pop sound’