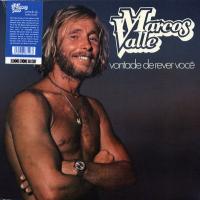 Marcos Valle is one of the few artists you cannot miss if you have the slightest interest in Brazilian music. Whether your taste is focused on bossa jazz, samba, psych folk or soul, Valle has surely recorded a great album for you. By the late '60s he had already put out enough quality records to secure a place within the top Brazilian songwriters of all time, but his career luckily did not stop there and he continued releasing amazing music over the following decades. He settled in Los Angeles in the mid-70s, tired of living under Brazil's military dictatorship, and started to collaborate with such talented artists as Leon Ware or Chicago. Vontade De Rever Voce, released in 1981, is his first album after moving back to Brazil and shows all the music influences received during his US years, especially boogie, soul and funk, featuring stellar collaborators: Sivuca, Chicago's Peter Cetera, Robson Jorge, and even Azymuth's Jose Roberto Bertrami on the Rhodes. The opening track, ''A Paraiba Nao E Chicago'', is Marcos Valle's own take on Leon Ware's ''Baby Don't Stop Me'', making clear that what he accomplished while in LA would now make its way into Brazil. This is an essential album for lovers of boogie. Listen to the irresistible groove of ''Pecados De Amor'' (Valle's own composition although previously recorded by Cristina Camargo) or ''Velhos Surfistas Querendo Voar'' and you will soon realize that this album is one of the most solid efforts in his entire discography. Even when the pace is kept mid-tempo, as on the closing tune ''Nao Pode Ser Qualquer Mulher'', Valle's songs manage to shake the dancefloor with his very well achieved mix of Brazilian sounds and funky rhythms. This first ever vinyl reissue is presented in facsimile artwork and pressed on 180 gram vinyl.